Was testing various models that do not have an "Hip Fix" shenanigans going on. In all cases, the upper body of the model would be tilted to one side, pulling the arm on the other side out of socket.

This is only seen locally. Other players see your back as slightly tilted but both arms in socket.

This issue occurred to varying degress on every model we tested that does not have the hip fix applied to it.

Interestingly, the avatar will align itself properly when you open your steamvr overlay, then go back to the messed up state as soon as you close the overlay.

In the first picture, two unity chan models: On the left, a player uploaded Unity Chan with the Hip Fix applied to it. Notice there is no back tilting and both arms are firmly in socket.

On the right, me in the default Unity Chan avatar. Note the slight tilt of the back and the right arm pulled out of socket.

In the 2nd picture, you will see, two identical models: On the left is a remote player. Note the tilted back, but both arms firmly in place.

On the right, is me. Note the horribly out of socket arm. 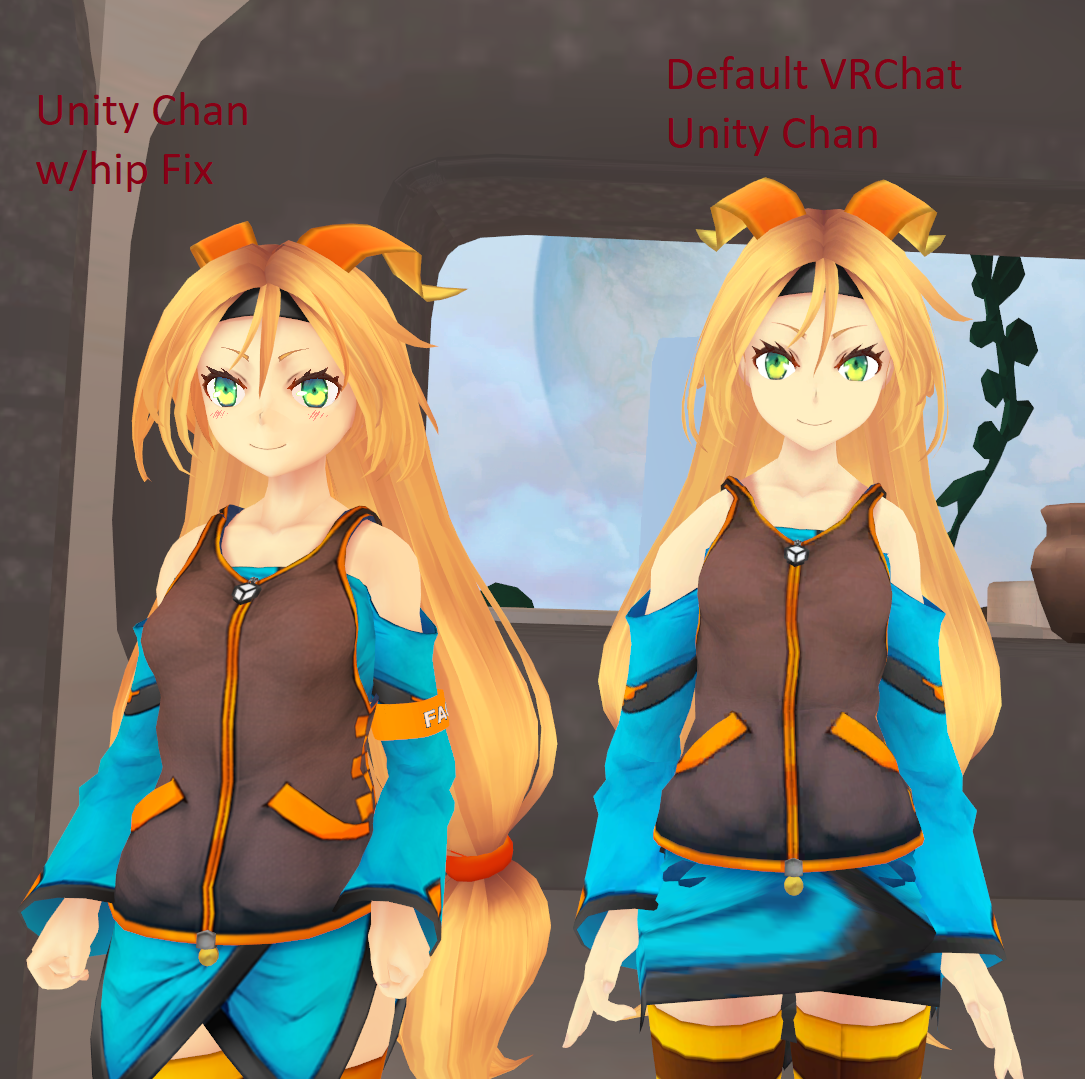 Issue was related to a nonstandard rig. See comments in issue. Closing.

This looks a lot like the shoulder pull that happens when your arms are too short on the model and your irl arms are 'at rest'.

@Chdata: Hmm, yeah, agreed. What happens if you pick your arms up a bit?

Can you post a screenshot of a rig that has this issue, and one that doesn't? Ideally of the hips and lower legs.

I'm unable to reproduce this on several of my own avatars where I used the "move hip bone upward above top of leg bones" tweak.

@Tupper - Community Manager: Here's the rig of the avatar shown in the photos. I'm not familiar with the "move hip bone upward above top of leg bones unless it simply means I can move the head of the hip bone up above the leg bones and all will be fine. I'll go ahead and test that as soon as I can. 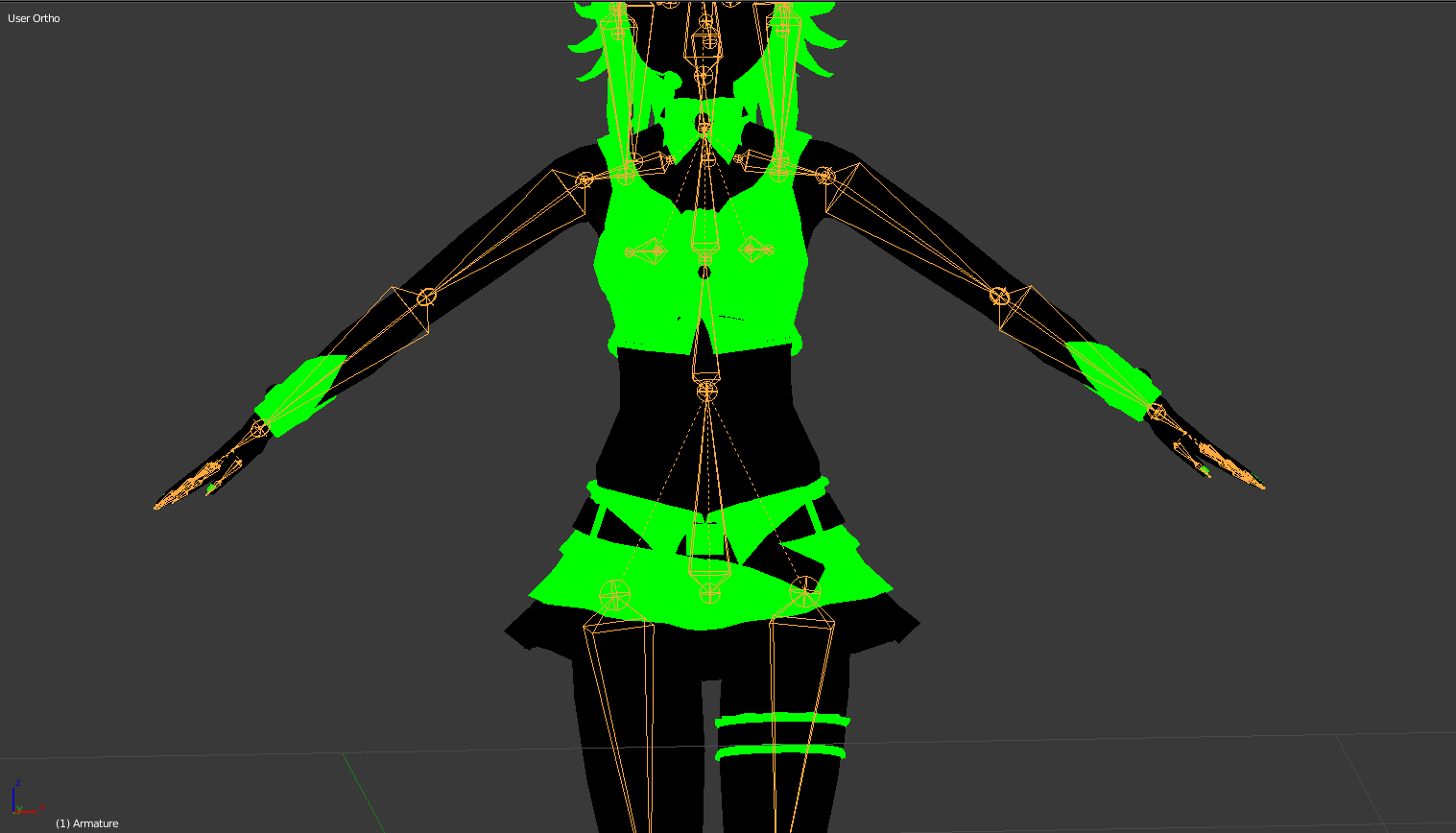 @Rak: Yeah, move the head of the hip bone to about halfway up to the tail. Additionally, zero out the roll of your legs (upper and lower) and straighten them out from a front view. From the side they should have an extremely slight bend-- as in, your knees should be very slightly bent.

@Tupper - Community Manager: Okay I'll test that tomorrow. I have drive 3 hours to attend a wedding this evening so I won't be able to get anything done tonight. Thanks

@Rak: No worries, thanks for all the testing. We've added this page to our docs to help nail down what your rig should look like: https://docs.vrchat.com/v2019.3.2/docs/full-body-tracking#section-rigging-requirements

@Tupper - Community Manager: Finally had a chance to get back in and test with the suggested changes. The issue no longer seems to appear.

@Rak: Thanks for testing! It's very likely that Unitychan isn't set up right either. The suggestion to use her as a baseline probably wasn't a wise one for me to make. Sorry about that.

Since this issue was determined to be a rigging problem, I will mark this as Complete.